Coldplay – A lesson in stage presence

@Coldplay Gave a lesson in stage presence and getting the crowd involved! #AHFODtour #ColdplayAuckland #MountSmartStadium

Since I’ve been in New Zealand, there haven’t been many opportunities to go to gigs – I guess for many ‘bigger’ bands it’s just too far off the beaten track with not enough people to make it profitable for the record companies… and for the smaller bands it’s probably a bit too expensive without a guaranteed audience.

This means that sadly, I have mostly been staying up to date with music online – a big change for me as during my time in London I must have gone to dozens of concerts and gigs. When tickets came on sale earlier in the year to see Coldplay in Auckland, both Jen and I jumped at the chance.

We flew up to Auckland (after I spent a few hours working at Mahuki), and picked up the rental car. We headed to the city centre – getting caught in the apparently ‘standard’ Auckland traffic – and arrived in time to grab some food at the Night Noodle Markets and to the hostel.

We set off mid-morning, stopping at a great place called Major Sprout for brunch.

We then headed to pick the car back up and drove down to Hamilton for the day.
The day in Hamilton involved heading to some of the local parks to wander around, and then out to dinner.

I have spent a fair amount of time in Auckland since arriving in NZ, with over a week when I first arrived and then again a few days after my month-long road trip. During the time I’ve been working at Mahuki, I’ve also been working part-time with Creative HQ to support a corporate accelerator so I’m fairly familiar with the city now. In contrast, Jen hasn’t spent much time there.

So, with the concert not until the evening, we decided to make the most of the day – and especially the sun that was shining over Auckland. We walked across the city from our hostel to the car and drove out to Piha Beach for the day.

Piha is a black sand beach, with the ‘Lions Head’ splitting the north and south beaches. I had been here before but in winter, so it was a lot different seeing Piha in summer…

Instead of there being just a handful of hard-core surfers like in winter, there were plenty of swimmers, surfers, and body boarders out (thankfully none needing the assistance of Piha Rescue).

It was a really nice day with the sun shining, so as I had thought the black sand got pretty hot, and there were a few occasions where hopping from one foot to the other was required.

Picture – Piha Beach in winter, with the north and south beaches separated by Lions Head

By late afternoon we were headed back into the city to Mount Smart Stadium in time to make our way through the 40,000 (plus) strong crowd to secure our spot while the support acts played.

First on the line-up was Jess Kent, an Aussie indie/pop artist… who honestly looked like she was dressed in PJs (fair does, it looked comfy as). I can’t say I’d heard of her before, but she definitely brought some energy to the start.
Second up was Lianne La Havas – a British alternative soul singer/songwriter…
I’d actually been wanting to see Lianne play while I was living in London, but had never managed to get tickets. So I was really happy to catch her opening for Coldplay here! 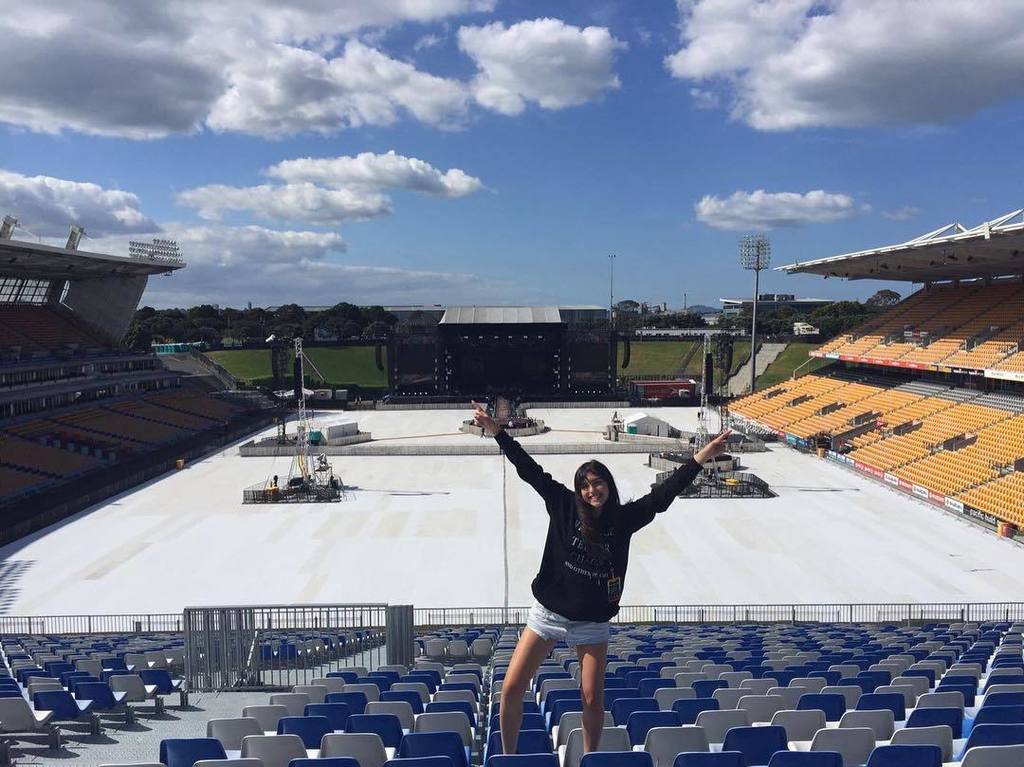 And then onto the main event…

Picture from Coldplay’s Instagram and the official photography from Auckland

Opening with ‘A Head Full of Dreams’ – in keeping with the tour title – and the band brought the energy up immediately. On entry, we’d been provided with special wristbands… and as the sunlight was fading, we saw what they were for:

The wristbands lit up, in ‘played’ with light in time with the music – which, as an audience member, made it feel like we were all contributing to the performance.

Further along the line, the classics came out – with wristbands syncing up to turn ‘Yellow’ at the appropriate time.
I can’t lie, previously, when I’d heard some of Coldplay’s more lethargic songs I’d found them a tad depressing… But hearing them played live, with Chris Martin adding his own brand of charisma and with the energy of the crowd as they sang along, all of them became more upbeat…

Mid-concert, the band shifted from the main stage to a centre-field platform. While there, Chris Martin started to sing ‘Four Seasons in One Day’ – a song pretty suited to New Zealand! Coldplay invited a guest on stage before making it a full verse into the song, and although I didn’t make the connection at the time, their guest was Neil Finn the front-man from Crowded House!

The show ended in a flurry of lights – wristbands pulsing in time with the music – fireworks, confetti and over-sized balloons… and I will readily admit that I’m now a Coldplay convert.

Overall, Coldplay gave everyone great lesson – a real ‘how to’ on stage presence, and interacting with the audience to make a spectacular show.

We left Auckland pretty early Sunday morning and headed back to the airport.
As the following day was the Mahuki Showcase, when I arrived back in Wellington, I headed back to Te Papa for final preparations…

And you can read more about how the Showcase went here!